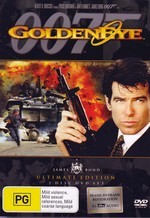 James Bond is back in an adventure, which is bigger, better, and more explosive than ever before. It's packed with incredible stunts, glamorous locations, beautiful women, and fast cars!

Bond has a dangerous new enemy to face in his latest mission. Aided by the Russian underworld, his treacherous foe has stolen a top-secret helicopter and the lethal Soviet space weapon GoldenEye with which he plans to destroy the Western world.

Only Bond can prevent the destruction in this heart-stopping race – which will leave you shaken and stirred.