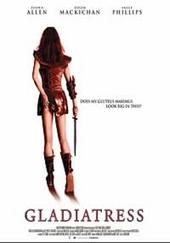 The talent and inspiration behind the International Emmy award-winning comedy show Smack the Pony, GLADIATRESS marks the first feature film collaboration between the sought-after comedy trio of PHILLIPS, MACKICHAN and ALLEN.

Clumsy village outcast, Worthaboutapig (Sally Phillips), is shockingly chosen to rescue her kidnapped sister Dwyfuc (Doon Mackichan)), from the Romans. Armed with only a goose, her mission seems hopeless, until the gods help her find her long lost sister Smirgut the Fierce (Fiona Allen). Together the sisters encounter soothsayers, gladiators, barbarians and even lawyers in their perilous quest. Once reunited these three unlikely heroines set out to save Celtic Britain by thwarting the Roman invasion in their own unique and outrageous style, proving that girl power was alive and kicking arse even in 55BC.