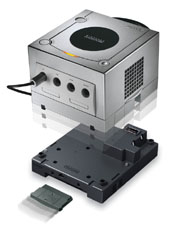 Due to COVID-19, we're unable to accept orders for non-essentials items at this time. Learn more...
The Game Boy is finally ready for its debut on the big screen, allowing a library of more than 1,000 games designed for the original Game Boy, Game Boy Color and the current Game Boy Advance to be displayed on home televisions through the GameCube.

The Game Boy Player, a one-inch platform connecting to the bottom of the GameCube, will match the Nintendo GameCube footprint and allow players to use either their console controller or Game Boy Advance to direct action on screen.