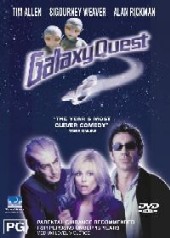 One of the best comedies around, with S.Weaver and A.Rickman in top form.

Twenty years after their series was cancelled, the stars of the classic 70s series Galaxy Quest are still in costume, appearing at Sci-Fi conventions for legions of faithful fans but some of those fans have a little too much faith. A group of aliens who believe them to be the characters they once played on TV, whisk the actors into space to help them in their all-too-real war against a deadly adversary. With no script, no director, and no clue about real space travel, the actors have to turn in the performance of their lives to become the heroes the aliens believe them to be.