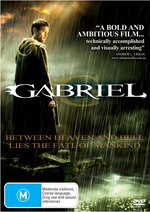 The cover art should get a higher rating than the movie because that's what convinced me to watch this low budget film! This is a gritty (befitting of Purgatory) Gothic action flick that reminded me of The Crow's dark atmosphere. It tackles the difficult subject of The Light and The Dark Realms, led by The Maker and The Dark Lord, in a way that isn't restricted by one specific religion. You meet the seven Arc Angels and seven Fallen Angels who must battle for the souls in Purgatory …and much like The Force, can sense each other's presence when they use some of their power, say to heal battle wounds or detox a Heroine addicted Angel.

There won't be many faces you recognise in this film. Michael Piccirilli (90210 & McLeod's Daughters) plays a fallen angel, Amy Matthews (Home and Away) Andy Whitfield (McLeod's Dau­ghters) is Gabriel, Dwaine Stevenson is Sammael of the Fallen (looks like a cross between Viggo Mortensen and Rutger Hauer) who for a relative newcomer managed the intensity and darkness of a seasoned pro. Many of the cast have either appeared in All Saints, Farscape, Home & Away or McLeod's Daughters. Some were screen virgins.

Both Arc Angles and the Fallen were fleshed out brilliantly and the writing was far from weak. Even some "Fallen” language was included and not translated with subtitles…

This was Shane Abbess's first project and he paid all of the $150,000 that this movie cost to make. Despite this small budget, some scenes transcend their less expensive surroundings…ho­wever there were a few that still felt like a stage production. This is not a complaint, given the circumstances, this film is a masterpiece and deserved of many accolades up there with the big boys.

If, like me, you enjoy pushing the boundaries of that thing called Faith, then this movie may challenge some of your beliefs. However, the intension is to entertain you, and it does that without the cheesy dialogue of Hollywood Big Budget Productions. If the opportunity comes your way to view this, take it.

We just love this movie. If you're into the whole fallen angel trying to save the world stuff you'll love this one. A+++

Between Heaven and Hell Lies the Fate of Mankind

A dark action/drama that takes place in the realm of purgatory. It reveals the struggle between arch and fallen angels for control over the city and its population of re-born souls.

At present, Darkness rules and Gabriel (Andy Whitfield), the last of seven arcs sent to bring back Light, must assume a human form. In the darkest places of the human soul, this lone archangel’s battle with his human feelings will prove as perilous as facing the fallen.