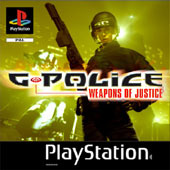 Due to COVID-19, we're unable to accept orders for non-essentials items at this time. Learn more...
The war is over and the G-Police now has control. But for how long? There is civil unrest and crime syndicates are gaining power. It’s only a matter of time before war breaks out. The marines are on their way, but just what is their Colonel’s hidden agenda? Thirty new missions await the G-Police recruit, this time with five air and land vehicles available, and twenty five weapon types with which to dispense justice. Fellow officers are also on hand, both in the air and on the ground, ready to battle against adversaries that display peerless A.I. behaviour. Making full use of more than thirty vehicle types, the enemy forces work together, attacking in deadly teams, and even setting up ambushes in the tunnels that provide the vital link between city domes.

Improving upon the winning formula of its predecessor, G-Police Weapons of Justice also caters for newcomers to this future-noir world with improved mission briefing sequences and in-game voice-overs, plus an updated control system that retains the subtleties of the original, while proving more responsive and easier to grasp. Designed specifically for the PlayStation® game console, G-Police Weapons of Justice supports the Dual Shock Analog Controller for a truly interactive flying experience.
Release date NZ
September 6th, 1999
Product ID
1454807