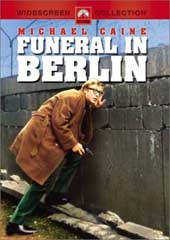 It was going to be a lovely funeral. Harry Palmer just hoped it wouldn't be his…

Michael Caine stars as Harry Palmer in this follow-up to the espionage classic The Ipcress File. The British spy is responsible for arranging the defection of a Russian officer in charge of Berlin war security. When his plan goes very wrong, he must rely on his own Cockney cunning to escape the morass of double-dealing, intrigue and beautiful, but deadly, women.