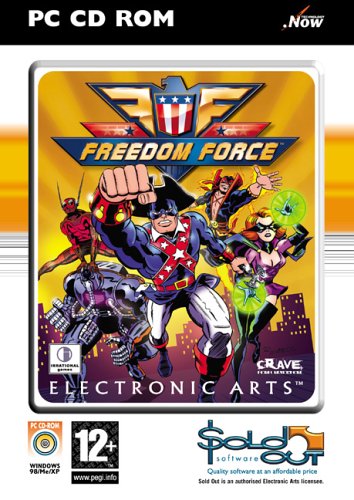 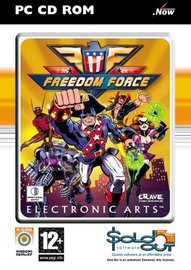 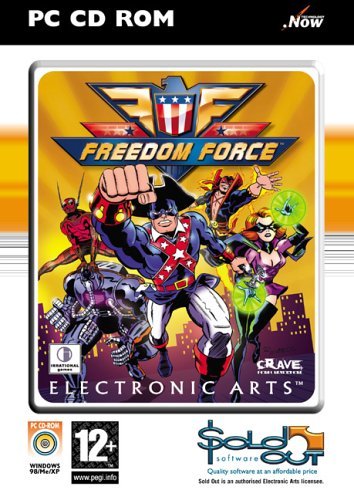 Freedom Force was the first superhero based RPG games that enabled you to play through the game with the default characters, design your own character complete with his or own distinctive costume and customizable powers, or team up with other players online to battle the forces of evil.

One of the standout features of Freedom Force is the complete freedom to destroy the environment or use it to your advantage (swing that lampost, throw a parked car, or tear apart a building!)

With a wide variety of game mods available online (costumes, characters, and single and multiplayer campaigns), Freedom Force remains one of the great superhero games.

Freedom Force's look and feel is highly reminiscent of the “Silver Age” of comics (the 1960's). Complete with irrevenant, amusing and often downright cheesy social references, attitudes and dialogue, Freedom Force is a lot of fun!

New York City circa 1962 --- the zenith of the Atomic Age, the height of the Cold War. Man was taking his first tentative steps into the void of space. With every rocket launch, with every successful space mission, one question grew more and more important in the minds of all mankind: Are we alone? A dreadful answer was on its way...

Evil incarnate in the form of Lord Dominion lurks just beyond another dimension, intent on absolute supremacy of the entire universe. In a diabolical plot to have Earth destroy itself, Lord Dominion schemes to unleash the awesome might of his Energy X on an unsuspecting populace.

But never fear, PC players can form, train and lead Freedom Force, a team of 14 original comic book heroes capable of standing toe-to-toe against Lord Dominion and his dastardly villains. Set in the Silver Age of comics, the game features both an intense 3D tactical battle engine and a rich RPG system.

Freedom Force consists of a series of tactical missions. Each time a new mission is initiated, players decide which hero will be sent to do battle and who will be in his or her squad. Once a squad arrives at the scene of the mission, the game switches to the tactical combat mode that allows the player to direct his or her individual characters to deal with the situation. In between these missions, the player enters management mode where heroes can be trained and new characters can be recruited by spending and distributing character points.

A fully featured RPG skill system rewards strategic heroes by allowing players to juggle stats, pump up powers, recruit new heroes and develop existing heroes based on experience accumulated in tactical missions. All characters have powers, which can evolve and be honed during the game.

All of the heroes and villains that populate Freedom Force boast unique features such as claws or wings.
More complex attributes like rubber bodies allow players to bounce instead of splatter when they fall or happen to be hurled off a New York City skyscraper.

The multiplayer aspect of Freedom Force includes a "mod" element that allows players to completely customize their characters. Up to 4-player online/LAN multiplayer mode will let gamers either team up with or square off against the forces of good and evil. Players can also bring in their custom characters into the single player game.

Over 25 unique heroes and villains, all with their own unique voices, personalities and attributes.

Control a squad of 4 individual characters - dozens of amazing character animations bring each hero to life.

Uphold justice with over 23 missions that offer a variety of gameplay from foiling a bank robbery to rescuing a captured hero.

Missions are based in real New York City locations including Central Park, the Empire State Building and the Statue of Liberty.

Intense 3-D tactical battle engine with fully destructible environments - destroy buildings and then use the debris to attack enemies.

"Mod" element allows players to completely customize and/or create their character and even create their own personal "skins."