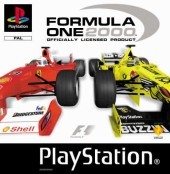 Due to COVID-19, we're unable to accept orders for non-essentials items at this time. Learn more...
FORMULA ONE 2000 is an official product of the 2000 FIA Formula One World Championship and features all of the 17 Grand Prix circuits and all the teams and drivers of the 2000 season.

New for 2000 are the United States Grand Prix held in Indianapolis, Formula One newcomers Nick Heidfeld (GER), Gaston Mazzacane (ARG), rising British hero Jenson Button and the return of engine suppliers BMW (with Williams) and Honda (with BAR) in a works capacity. Jaguar also enters the competition for the first time and joins the ranks of established front-runners Ferrari, McLaren and Jordan.

The representation of the Grand Prix circuits in FORMULA ONE 2000 – already regarded as the best by many - has been improved even further. Each track has undergone a complete redesign to ensure they’re the most accurate, realistic looking and detailed circuits found on any Formula One PlayStation game.

After the release of FORMULA ONE 99, Psygnosis and Studio 33 have received extensive feedback and suggestions from Formula 1 fans all over the world. As a result, the team has focused on incorporating many of these suggestions into FORMULA ONE 2000. Some of them are the return of a dedicated Arcade mode with a unique gameplay structure, additional rules & regulations like the Green Flag, more frequent and relevant commentary and improved AI, Damage and Collision routines.