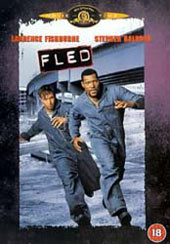 Two dangerously mismatched convicts are thrown into a wild race to outwit, outrun and outgun vicious enemies on both sides of the law in this high-impact thriller bristling with high-speed adventure, mind-blowing stunts and non-stop action! After escaping from a prison chain gang, Piper (Lawrence Fishburne) and Dodge (Stephen Baldwin) find themselves handcuffed together – and at each other's throats! Relentlessly hunted through the Georgia wilderness, the reluctant allies fight their way into the underground of Atlanta, battling the authorities – and each other – all the way. But when Dodge's connection to $25 million in stolen loot attracts mob assasins and corrupt government officials, the action is propelled into a deadly new dimension. With no place to hide, and everything to lose, Piper and Dodge embark on a blazing, take-no prisoners quest to secure the key to their survival: a computer disk that could blow the lid off a high-level scam.