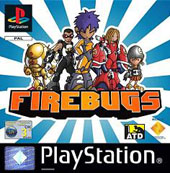 Due to COVID-19, we're unable to accept new orders at this time. Learn more...
Fire Bugs is one of the fastest-moving, best-looking, most thrilled-packed racing games to hit the PSOne since the machine's inception. With weapons and power-ups galore, stacks of circuits in different locations and a host of opponents as determined as you are to cause mayhem, it mixes mind-numbing velocity with wanton aggression, creating a dizzy mix of addictive, high-octane fun. Oh, and you can drive on the walls and ceiling. Storyline overview: Five speed freaks jump into their futuristic, impact-resistant Fire Bug racers, revving them scarily. Their mission? To drive as fast as they can, blast or otherwise incapacitate anyone who gets in their way, and win the Fire Bugs Championship. To do so, they'll need to get the better of their rivals on a wide range of tracks dotted all over the world, at speeds of over 400 mph. Features:
Release date NZ
October 18th, 2002
UPC
711719410621
Product ID
1460684