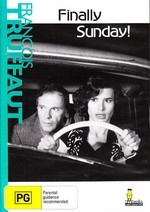 A businessman (Jean-Louis Trintignant) is wanted by the police, convinced he has murdered his wife’s lover. But his secretary (Fanny Ardant – Elizabeth) refuses to condemn him so quickly and, despite her own doubts, she sets out to investigate the case herself.

Based on the novel by Charles Williams, beautifully shot in black and white, and with great acting from Truffaut’s then-wife, Ardant, this a fitting swansong for the great Truffaut. Truffaut’s final feature is a compelling Hitchcockian thriller.