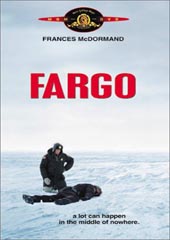 Makes sense of the TV series, same grim humorous take on what happens when misguided mis-fits collide. Recommend … If you're not squeamish!

Loved the TV series, watched season one then purchased the Movie, which I didn't like as much. Black Comedy and Billy Bob Thornton are a perfect match. Would highly recommend.

An ordinary place, an extraordinary thriller.

Dark yet funny, this highly original thriller from the Coen Brothers follows the plight of Jerry Lundegaard (William H. Macy), a hapless car salesman so deep in debt, he hires two thugs (Steve Buscemi, Peter Stormare) to kidnap his wife. But he doesn't bargain for Police Chief Marge Gunderson (Frances McDormand), heavily pregnant and determined to solve the crime. You betcha, yaah.