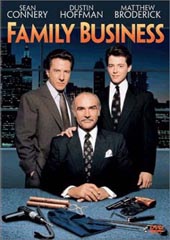 There's nothing like a good robbery… to bring a family together. It's the perfect crime: put a key card in the lock, get in, get out and split one million dollars. No violence, no guesswork, no cops, no sweat. What could go wrong?

What doesn't go wrong? Sean Connery and Dustin Hoffman team with Matthew Broderick to play three generations of the same family, intent on Family Business burglary. Somehow, someway, they're determined to make crime pay. But the real payoff is seeing these three great stars in this movie directed by Sidney Lumet.

Condition
Used - Acceptable
Well used but in working condition. Does not include original manuals and packaging.
Seller Details
DVDs 5 stars Ships from Pukekohe