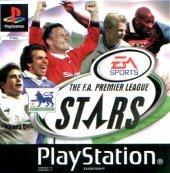 Unavailable
Sorry, this product is not currently available to order
Looking for a new footballing challenge? Want to catch all the glamour of The F.A Premier League in an all action football game? Want to take the Stars and make them better? Look no further – The F.A Premier League Stars gives you all of this and more. The aim of STARS is to take a team and make them champions of the Premiership. Whilst doing this the user has the opportunity to gain “stars” – a currency with STARS that then enables the “upgrading” of players specific skills, such as shooting, tackling, passing etc. The aim is to “Max Out” your team by getting all of your players up to their maximum rating.
Dominate your F.A. Premier League.