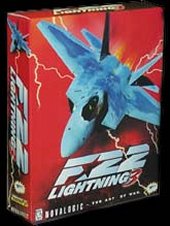 Unavailable
Sorry, this product is not currently available to order
F-22 Lightning 3 puts you in the cockpit of the world's most advanced jet fighter. You wear the cloak of stealth technology. You carry the power of tactical thermonuclear weapons.

They won't see you coming, but they'll know you were there.

STRONGER!
F-22 Lightning 3 is stronger than ever. Pilots will now be able to carry tactical nuclear weapons that will spectacularly level entire regions. Additionally, the attention to detail in NovaLogic's improved F-22 flight model will have desktop pilots reeling. Experienced flight sim pilots will love exploring the edges of the dynamic flight envelope while novice users will appreciate the multitude of new "Auto" feature options that promise perfect take-offs and landings at the touch of a key. Lightning 3 will also feature the most stunning weather environments ever before attempted in a flight sim. Players will be able to fly in and out of areas of concentrated rain, snow, hail and wind. As in actual flight, ambient temperature will play a role in the performance of the aircraft. The F-22 will execute maneuvers differently in desert environments versus arctic conditions. And as expected, these variations will be compounded by changes in altitude and corresponding atmospheric pressure.

FASTER!
NovaLogic has always been recognized as the industry leader in graphical renderings of aircraft and their environments. Lightning 3 upholds that tradition with the most dazzling visual effects ever introduced in a flight simulation. Pilots will notice the beautiful attention to detail like raindrops splashing on the tarmac and snowflakes drifting from the sky. 3D Card owners will be delighted to know that F-22 Lightning 3 is scheduled to support an extensive array of 3D hardware including both Glide and Direct 3D technologies.

LOUDER!
The world's stealthiest fighter just got a whole lot louder. But don't worry, this kind of noise won't show up on your enemy's radar. Introducing NovaLogic's Voice-Over-NetTM technology that allows pilots to talk to each other during the heat of multiplayer battle. When you're pulling nine g's with full rudder and trying to shake that bandit that's stuck on your six, you don't have time to let go of the stick to "chat" to your wingman for help. With Voice-Over-NetTM simply push a button and talk, just like real pilots do. NovaWorld servers will provide exclusive support of Voice-Over-NetTM technology, allowing users to enjoy voice communications through their standard Internet connection. So stop chatting and start talking.

"F22 Lightning 3 is a premiere flight simulation title with a great learning curve and graphical qualities that set it apart from the competition."
-Pure Gaming Network