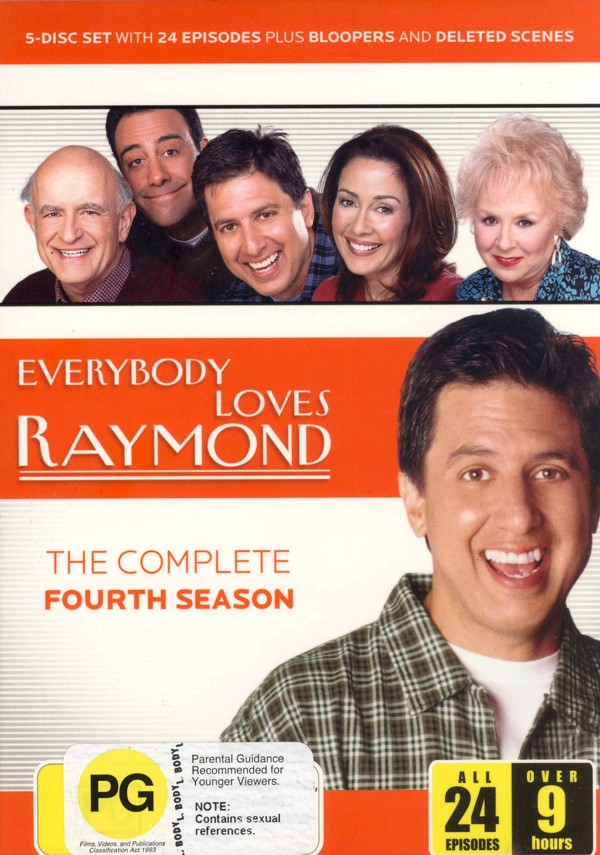 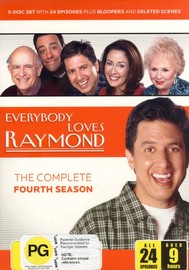 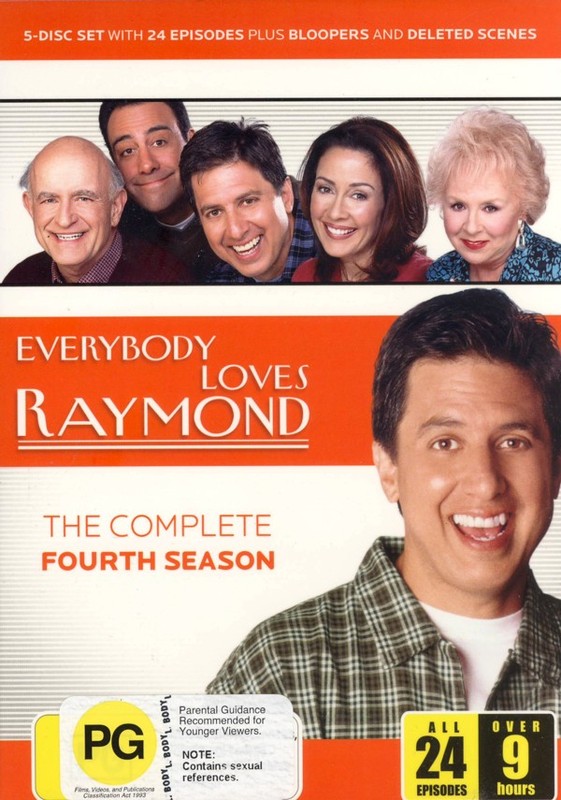 How do we love Raymond's fourth season- Let us count the classic episodes: “The Tenth Anniversary,” in which Debra discovers that Raymond taped over their wedding video with the 1991 Super Bowl; “The Boob Job,” in which Debra surprises Raymond with an apparent uplifting enhancement; “Debra's Workout,” which leaves her in an amorously aggressive mood; “No Thanks,” in which Debra tries a new, “nice” approach to win Marie (Doris Roberts) over; “Debra Makes Something Good,” in which Debra's braciole upsets the family balance; and the Emmy-nominated “Bad Moon Rising,” in which Raymond desperately tries to deal with Debra's volatile mood swings. Yes, it was a career year for Patricia Heaton, who became the first cast member to be honored with an Emmy (each of the core ensemble was nominated). As with the first three seasons, season 4 concludes with a flashback episode, “Robert's Divorce.” But for the first time, the episode is capped with a cliffhanger, as Robert (Brad Garrett) retrieves his ex-wife's discarded phone number after running into her at a restaurant.

Series star and co-creator Ray Romano once told Entertainment Weekly that Raymond's best episodes start with “a small relatable concept and go somewhere bigger and deeper.” Among the season's most memorable episodes that follow this formula are “The Can Opener,” in which the entire Barone family becomes embroiled in Raymond and Debra's senseless argument; the Emmy-nominated “The Christmas Picture,” in which Marie threatens to sit out a family photograph once she learns that Debra's parents are to be included; and the one in which Raymond discovers that Debra enjoys a good cry during her “Alone Time.” (“Do you cry because I'm stupid-” he asks. “No,” she replies, “I eat ice cream because you're stupid.”). And all parents whose children came of age during the Pokémon craze will identify with Raymond's desperate attempts to scrounge up a valuable card for his daughter in the episode, “Hackidu.” To quote the old comedy maxim: It's funny because it's true. And it's the universal truths and minutiae about family and married life that are at the heart of Raymond's enduring success

By now, we are all familiar with the story of Ray Barone, a successful sportswriter living on Long Island with his wife, Debra, daughter, Ally, and twin sons, Geoffrey and Michael. Ray's meddling parents, Frank and Marie, live directly across the street and embrace the motto “Su casa es mi casa,” infiltrating their son's home to an extent unparalleled in television history. Frank's favorite expression, “holy crap,” is shouted at regular intervals, and Marie's “cooking advice” is less than appreciated by Debra. Brother Robert, a divorced policeman, is constantly moving in and out of his parents' house, and loves to drop over and resent Ray's successful career and happy family life. Ray and Debra just wish someone would knock once in a while…