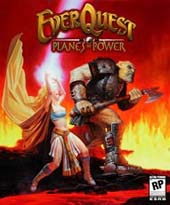 Due to COVID-19, we're unable to accept orders for non-essentials items at this time. Learn more...
Cross over to realms of ancient power, where legendary creatures guard long-hidden secrets. EverQuest: The Planes of Power will take you to places not meant for mortal eyes, reveal treasures and challenges mightier than any before, and bring you face to face with the gods themselves. Prepare yourself, the Planes await!

EverQuest: The Planes of Power is the next installment in the best-selling, critically acclaimed EverQuest series. The new expansion pack will introduce more than 425,000 current EverQuest gamers to an arching storyline that takes players on an epic adventure through the Planes of Power, home of the Gods of Norrath. Hundreds of new items, quests and encounters will keep even the most revered players challenged and enthralled.

In The Planes of Power, a portal has been unveiled and now travelers can experience a world unlike anything they have ever seen. Share in the knowledge of this extraordinary discovery as you fight to bring justice to Norrath. Veteran gamers will face new challenges in each of the 18 newly discovered planes, while new players will benefit from the Plane of Knowledge that hosts scores of new and challenging quests and open portals to Norrath making travel faster and easier than ever. Fiercely battle the minions of Rallos Zek in the Plane of War, join arms with Karana to regain control of the Plane of Storms, and overcome vile pestilence in the Plane of Disease.
20 new planer zones that push teamwork abilities to the limit