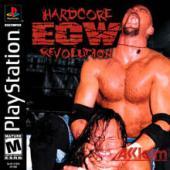 Due to COVID-19, we're unable to accept orders for non-essentials items at this time. Learn more...
ECW is taking the wrestling world by the horns and continues to develop an intense following with their hardcore wrestling action. When you play this intense game you'll find yourself making death-defying, high-flying maneuvers with the most extreme wrestlers as never seen before in any wrestling game.

* Three all-new arenas capture the intensity of ECW: The Madhouse Of Extreme (NYC), The ECW Arena (Philly) and Pay-Per-View Events

* Create Your Own Pay-Per-View Mode: Choose from 8 wrestler matches, Battle Of The Belts, Specialty Matches and Authentic ECW events.

* Over 20 Game modes that push you to the EXTREME including the first ever Barbed-Wire Match.

* Create-a-Wrestler to Customize your wrestler from move sets to costumes to all-new facial characteristics and authentic entrance themes.

* Outside the squared circle chaos take Hardcore Wrestling to extreme measures by leaving the ring.

* Over 400 punishing moves including signature moves for each wrestler.

* Trademark finishing moves and taunts for each wrestler that will kick your teeth in.

* Color commentary from the voice of ECW - Joey Styles.