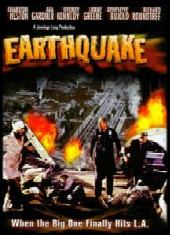 When the most catastrophic earthquake of all time rips through Southern California, it levels Los Angeles and sends shockwaves through the lives of all who live there.

Charlton Heston head the all star cast as Stewart Graff, a rugged construction engineer who lives with his spoiled and wealthy wife, Remy. George Kennedy plays Lew Slade, a tough cop ina city of devastation. Lorne Green is Sam Royce, a construction company owner trapped in his own building.

Comments: Item is in like new condition. (Diff. cover art).

Comments: Cover different than the one shown