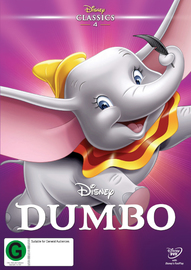 $20.00
Raya And The Last Dragon
DVD
Pre-order - out Wednesday 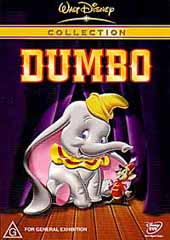 A heartwarming story of friendship and belief in one’s self, Dumbo is an amazing tale of one little elephant with “jumbo sized” ears – because of this, he is cruelly nicknamed Dumbo! His mother looses her temper and rightly so and gets locked up as a mad elephant and poor little Dumbo is left to fend for himself…well except for a self-appointed mentor protector, Timothy Q Mouse.

With Timothy by his side, Dumbo embarks on a remarkable adventure and with the help of new friends (a group of crows), realises his ability to fly. After performing at the circus, Dumbo is an instant star and with Timothy as his Manager and his Mum by his side, he confidently soars to new heights – literally!

“Although Dumbo offers no startling innovations in animated cartooning, it is probably Disney's best all-round picture to date.” TIME Magazine (2009)

“..Highly Recommended. Dumbo is sometimes given a lower position in the Disney canon. It's not a technical virtuoso, nor is its story as grand in scale as some of the others; on the other hand, its simplicity means that its appeal and its message are timeless. The cartoon about the child elephant that overcomes adversity and perceived differences to find his true talents still resonates, even as we celebrate the film's 70th birthday.” DVD Talk

“Touching, comic, visually inventive and emotionally convincing, this remains a jewel in the crown of Disney's golden age.” Film4

“Until now, I don't believe I've ever truly given Dumbo it's due. Overshadowed by it's far more ambitious and over-achieving siblings, this little gem showcases more heart and beauty than anyone gives it credit for. You have my unabashed recommendation..” DVD Verdict

“Dumbo was for Disney what The Old Man and the Sea was for Hemingway: a simple but powerful story that's brilliantly rendered and succeeds precisely because it is so simple, archetypal, and true.” Movie Metropolis

“One of the best of Disney's animated features.” Time Out