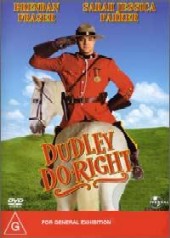 Dudley Do-Right follows the hilarious exploits of the dedicated but hapless young Mountie, as he struggles to outwit the evil Snidely Whiplash. Snidely has devised the scam of the century setting off the biggest gold rush since the Klondike. Prospector Kim J. Darling is an unsuspecting oaf who joins the millionaire wannabes streaming into the town that has since been named Whiplash City.

It's up to the usually sweet and naÃ¯ve Dudley to lead the charge, defeat the villain, win the heart of Nell Fenwick and bring peace back to semi-Happy Valley. Hopefully, he won't screw it up.