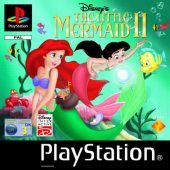 Due to COVID-19, we're unable to accept new orders at this time. Learn more...
Join Ariel and Melody in their fantastical undersea adventures on PlayStation. Based on Walt Disney’s The Little Mermaid and The Little Mermaid 2 – Return to the Sea movies, the interactive game is divided into two separate parts reflecting the different films.

Part One follows the exploits of Ariel, a mermaid who dreams of becoming human, making her way to meet with the dreaded sea-witch Ursula and her sodden promise to grant Ariel her wish. Only Ursula has other plans, a small one: ruling Alantica. Bespoke to Ariel, she takes up Ursula’s offer to become human, only to plunge her father, King Triton, and the whole of Atlantica into danger.

Part Two is set some fourteen years later where Ariel and Eric are now parents of Melody, who lives on land, but longs for the sea. Melody as she ventures out, against her mothers’ will, into the wide ocean in search of Atlantica. A secret kept from her since birth. Only this time, Ursula’s oh-so-evil sister, Morgana is out to avenge Ursula demise and prove to her mother that she was the better of the two octopuses! And Melody is at the centre of her plans…

Danger lurks for Melody when she ventures into the sea, and Ariel must reunite her childhood friends to rescue her daughter.