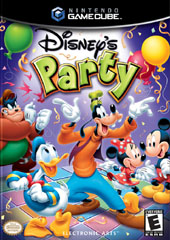 Due to COVID-19, we're unable to accept orders for non-essentials items at this time. Learn more...
Disney Party drops players into the mix with Mickey Mouse and friends to embark on challenging adventures that include collecting magical objects, solving puzzles and maneuvering through obstacle courses. Each player must complete their game board by buying or winning special items such as stars, lollipops and teacups. The first one to complete their game board wins!

Players may choose between four different modes of play. In "Game Board" mode, players travel through the Party Park, competing with friends in mini-games and other contests. "Play in Pairs" mode allows players to team up with a friend and travel through the Party Park together. In "Mini-game" mode, players can choose to play any of the 30 mini-games found throughout the Party Park. Finally, "Free Pass" mode lets players adjust the rules of any mini-game that they have unlocked in either "Game Board" or "Play in Pairs" mode.

The mini-games in Disney's Party feature challenges that will give the players a whirlwind of a good time. For instance, players will race pirates to a pot of gold, try to out run a rolling avalanche on a snow board, navigate a waterfall in a kayak, save cows from an alien abduction, bust out the moves in a dance competition; and collect crystals while bungee jumping.

As players compete in mini-games and solve puzzles, they will explore eight entertaining environments within the Party Park. These exciting and unique worlds include Wild Garden, an intense jungle expedition; Steam Mountain, an authentic Old Wes town; and Future Town, an ultra-modern city. In addition, players can collect up to 234 Disney Character Cards each depicting a famous Disney pal.

* Play as one of six Disney characters including Mickey, Minnie, Donald, Daisy, Goofy and Billy, a perky and curious ghost.

* 14 different worlds to explore – each with its own unique theme.

* Four game modes including Game Board, Play in Pairs, Mini-game and Free Pass.

* 30 collectible game items to help you win the game!