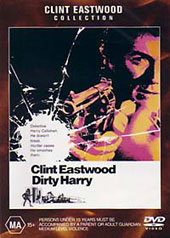 You don't assign him to murder cases, You just turn him loose.

It's all in a day's work for Dirty Harry, a plainclothesman with the San Francisco police and for his new partner, Chico. A bank robbery and an attempted suicide form the prelude to the main event: catching a skillful sniper who is murdering the innocent while holding a city to ransom. Catching him becomes a war between good and evil – with the protagonists on both sides shown as ruthless, bitter and merciless products of a violent society.