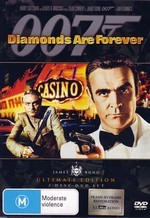 Sean Connery is lured back to play the suave British agent 007. The writing style of “Diamonds Are Forever” sets the pattern for many of the upcoming Roger Moore episodes.

Large quantities of South African diamonds are being stolen but haven't found their way into the world market. It is James Bond's mission to discover who is stockpiling these diamonds and why. He discovers that Ernst Blofeld has constructed a giant laser generator, suspended in orbit around earth, that uses diamonds to intensify its energy causing nuclear warheads, rockets and submarines to spontaneously self-detonate. Blofeld intends to hold an international auction with nuclear supremacy going to the highest bidder.

Bond pursues his arch enemy to his oil rig base off the Californian coast to prove that diamonds aren't just a girl's best friend.