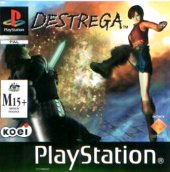 Due to COVID-19, we're unable to accept new orders at this time. Learn more...
Unlike any other fighting game on the market today, Destrega allows fighters to move freely within its 3D environments, thus allowing for both close and long range fighting. The usual physical attacks are accompanied by a multitude of sensational, long-range magical attacks and contribute to a very fast-paced action/fighting title.

New realistic fighting action: Two players battle it out in a true 3D environment. Players are free to move anywhere within stages. It's a new system for people who are tired of 2D or semi 3D fighting games.
Blast opponents from afar with magic or up close with pounding blows: Since movement is unlimited, move as far away as you like or get up close and personal. Either way, you will be able to do some serious damage.
Advanced game system lets even novices release incredible attacks: Each button launches an attack. By using the buttons in different combinations, even the most novice players can play right away. More advanced players will be able to plan more than they ever have before.
See and hear the action:Each attack button has a certain sound associated with it. By listening to what your opponent says, you will be able to predict the type of magic and plan your escape or counter-attack more effectively.
And lots, lots more:Destrega boasts a cast of 12 unique characters, 6 different battle modes, story mode, 12 interactive environments, and supports the Dual Shock game pad.
Release date NZ
October 8th, 1999
Product ID
1454885