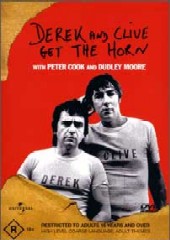 Derek & Clive Get the Horn

This is the last authenticated sighting of the legendary Derek and Clive. They were not on good terms and were in the process of breaking up but Virgin lawyers and a SWAT team persuaded them to show up at the Town House Studios in the Goldhawk Road, Shepherd's Bush. Don Everly was in Derek's limo whilst Phil administered oxygen to Clive in a stretched caddy.

Contractually both Superstars were entitled to enter the studio first and the multiple pile up that ensued is still talked about in police circles, it took all the diplomatic skills of director Russell Mulcahy (later to make the less visually exciting ‘Highlander’ with Sean Connery) to get the pair into the studio. The recording was fraught. They left as they arrived in separate cars, surrounded by armed bodyguards, accountants and members of The Ealing Golf Club.

For the past thirteen years there have only been rumours. Derek was allegedly seen at group therapy in Malibu with Barbara Streisand. Others claim that Clive has embraced Satanism and is living with a 12 year old in Manila. In 1980 security cameras captured a blurred image of a Caucasian male resembling Clive on a luggage carousel at Heathrow shouting obscenities. He was urging Richard Branson to start an airline ~ “It can't be f!*king worse than this one!”

Despite the best efforts of Interpol, the CIA and the ruthlessly professional Cilla Black organisation, their whereabouts are still unknown, so PolyGram have decided to release the video as a ‘tribute’ to the ‘Sultans of Sleaze’. A proportion of the royalties (100%) will go to PolyGram and the remainder will be put in trust for the Derek and Clive Charitable Foundation.