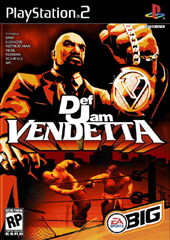 Unavailable
Sorry, this product is not currently available to order
Def Jam VENDETTA marks the first interactive entertainment title from EA and Def Jam Records, and will fully integrate a powerhouse roster of Def Jam artists into the storyline, including new hit songs from the artists, as well as classic Def Jam tracks. Each artist has contributed one original introduction and victory sequence incorporating their own voice and motion. Artists participating in the game include DMX, Ludacris, Method Man, Redman, NORE, Scarface, Ghostface Killah, Capone, Keith Murray and WC. The game also features Def Jam songstress Christina Milian and the world famous DJ Funkmaster Flex.

Developed by renowned AKI Corporation and the award-winning EA Canada creative team responsible for NBA STREET, Def Jam VENDETTA takes two cutting-edge interactive gaming teams and ties it all together with creative input from the most sought after hip hop lifestyle company of all time, Def Jam.