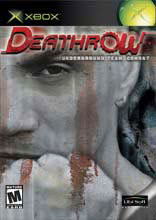 Due to COVID-19, we're unable to accept new orders at this time. Learn more...
The object of Deathrow is for you to win matches by whatever means necessary, either by scoring as many points as possible before time runs out, or by severely injuring your opponents and removing them from the field of combat. As the game begins, two teams of four players square off in a combat arena to compete in an intense, unmediated slugfest to determine the champion.

As you engage in fierce hand-to-hand combat with highly intelligent AI opponents seeking retribution for not only themselves, but also for their fallen teammates, you’ll soon understand the sacrifices necessary to become the supreme team of the league.

Deathrow has a team management component allowing you to customize your own team according to your style of play. You can build your players’ statistics from match to match while gaining speed and power bonuses. Injured players can be healed between rounds if you have enough money, or you must save your winnings to buy them back. With more than 130 unique characters, dozens of holds, and over 800 base animations, Deathrow is graphically immersive and intense.