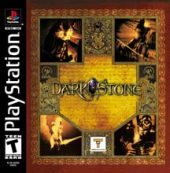 Due to COVID-19, we're unable to accept orders for non-essentials items at this time. Learn more...
The world is living under the dark shadow of a nefarious dragon. Villagers are turning to stone, armies of skeletons, swarms of wasps, and lumbering ogres lurk everywhere. Evil is spreading like a vine. And only you can stop it.

Scattered across the kingdom are seven ancient magic crystals that together invoke the power of the Orb. Without it, you have no hope of defeating your fire-breathing nemesis. As a knight, monk, thief or sorceror you will creep through dungeons and castles, explore wilderness and glades, and encounter traps, curses, and puzzles on your quest to unearth the crystals. It may take months. It may take years. It may take away any hope you ever had of living a normal, productive, twentieth century life.

Darkstone is a role playing game that will carry you away to a fantastic medieval world in the pure Heroic Fantasy tradition, where you will have to defeat a mysterious and terrible dragon called Draak...