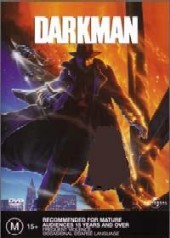 For the record, if you're not really familiar with old Hammer horror films or the super-stylised silent horror movies, then you might be a little overwhelmed by the aesthetic of this film. It borrows heavily from the highly dramatised films of old, and obviously is a sort of homage to the Phantom of the Opera as represented by the agonised stylings of the incomparable Lon Chaney.

However it is still an action film, and it really does succeed in this fact, with a truly outrageous helicopter chase towards the end which is absiolutely hilarious yet at the same time finally convinces the audience to label the eponymous, delusional, unfeeling but heroic Darkman as badass.

As for Liam Neeson, he's obviously enjoying himself, acting so hard he's practically chewing the scenery. He manages to create a complex, disturbing and enigmatic hero in spite of, or perhaps because of, Darkman's madness (caused by his physical imperception to pain and deformity by the local big bad's goons).

So, in short, if anyone is looking for a damn good superhero movie that still makes short work of it's predecessors, look no further than Darkman, an intelligent, highly enjoyable movie.

Dr. Peyton Westlake is on the verge of realizing a major breakthrough in synthetic skin when a gang, led by the sadistic Robert G. Durant obliterates his laboratory. Burned beyond recognition and altered by an experimental medical procedure, Westlake attempts to rebuild his laboratory and reestablished ties with his former girlfriend Julie. But his most challenging task lies within himelf. Torn between his desire to create a new life with Julie and his quest for revenge, the man known as Darkman begins to assume alternate identities in this stunning, fast-paced action thriller from director Sam Raimi.

"When attorney Julie Hastings (Frances McDormand) uncovers corrupt city real estate dealings, evil thugs attack her scientist boyfriend, Peyton Westlake (Liam Neeson). Left for dead after his lab is detonated, he miraculously survives when the ensuing blast hurls him into the nearby harbor. Treated as a John Doe at a city hospital, he is unknowingly submitted to radical therapy which numbs his nerves to feeling--but which heightens his strength and his emotions. Once conscious, Peyton escapes from the hospital and builds a ramshackle lab in an abandoned industrial plant. Horribly burned and scarred by the lab explosion, he uses synthetic skin to impersonate his would-be murderers and seek retribution for their evil deeds. Peyton also tries to reunite with Julie, who believes him to be dead. While the film has an average script, it is overcome by the flashy cinematography of Bill Pope, the bombastic score by Danny Elfman, and the well-choreographed direction of Sam Raimi. The director confidently walks the line between suspense, action, comedy, and romance as he examines a bitter, victimized antihero who risks becoming as monstrous on the inside as he appears on the outside." --Bryan Reesman