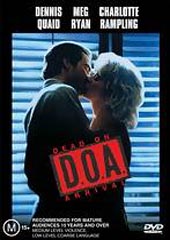 In his desperate search, everyone's a suspect, even the woman who loves him (Meg Ryan – Top Gun, The Presidio, Innerspace). Directed by Rocky Morton and Annabel Jankel, creators of superstar “Max Headroom,” D.O.A. pulsates with explosive action and sizzling performances by Quaid and Ryan, two people who find themselves suddenly living on the edge. It's a night on the run, filled with fear, danger…and passion.