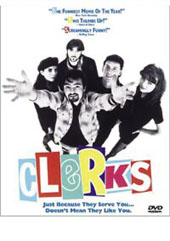 Just because they serve you doesn't mean they like you.

Its just another day for Dante Hicks, until his boss calls him into work at the Quickstop on his day off. With a hockey game at 2, and his girlfriend still hacking him about going to back to school. Dante begins to get into a bigger frenzy when he learns his ex-girlfriend, Caitlin, is getting married. With his always late accomplice Randall strolling in to work at the video store, Dante is left with no choice but to bend the rules a little with work, customers, and most of all his love life. Can he get away with it all?