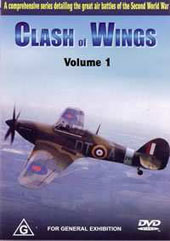 Unavailable
Sorry, this product is not currently available to order
A comprehensive series detailing the great air battles of the Second World War as it has never been told. Featuring rarely seen aerial combat footage of all the major combat aircraft types from World War II.

The Bluff is Called

World War Two is declared and Hitler's Luftwaffe employs revolutionary new aircraft and tactics in the Blitzkreig attacks on Poland and Scandinavia which preceded their invasion. Aircraft Featured: JU87B, Hurricane, Spitfire, BF109, BF110, HE111, JU53 and DO17

The Plunge Into Reality

“The Battles of France and Britain”

New fighting techniques using newly developed aircraft were unleashed over Britain and France by both the Allies and the Axis and would provide a glimpse at the speed and efficiency of what was to come throughout the rest of WWII. Aircraft Featured: Hurricane, Spitfire, BF109, BF110, JU88, HE111, DO17 & 217, JU87, Bristol Blenheim, Fairy Battle and JU52

Wings of the Rising Sun

The air war in the Pacific is launched commencing with a surprise attack on Pearl Harbour. This campaign saw the evolvement of carrier based aerial warfare with great battles raging between the aircraft carriers of Japan and the United States. Aircraft Featured: Mitsubishi Zero, Betty and Type 96 Bomber, Aichi D3A Val, Douglas SBD Dauntless, B25 Mitchell, P40, Wildcat, Hellcat, Corsair and PBY Catalina.