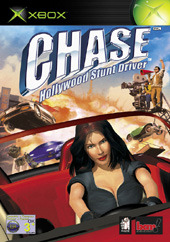 Due to COVID-19, we're unable to accept orders for non-essentials items at this time. Learn more...
Four unique movie sets including a Gangster City and a Spy Action Thriller, in addition to a variety of vehicles, mean that Chase promises heart-pounding action and spectacular movie-style special effects. Players will have to hit their marks as they attempt jumps, smash through props and race through movie sets in order to please the director before moving onto the next action-packed stunt. Adding to the thrill of the game, players will not only drive traditional four-wheeled vehicles, but will have motorcycles, a three wheeled Ramen delivery tuk-tuk, a large missile truck, and more at their disposal.

Chase will take full advantage of the technical capabilities of Xbox, not only through its extensive, action-packed and fast paced gameplay, but also graphically due to the machine’s unprecedented processing power. I-Imagine has been able to create special effects such as real-time reflections and realistic shadows. In addition, the system’s extensive memory and built-in hard disk system is enabling them to create highly detailed and rich environments which can quickly stream in new sections, meaning practically limitless gaming environments.