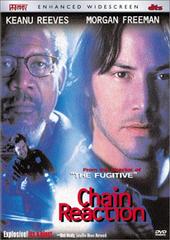 A student machinist (Keanu Reeves) finds himself caught in a maze of secret government cover-ups, high tech espionage and murders after working on a groundbreaking scientific experiment. Eddie Kasalivich (Reeves) and Lily Sinclair (Rachel Weisz) are part of a team of scientists who have developed a revolutionary new source of energy. But no sooner have they finishes celebrating their triumph, than their lab is destroyed and the head of their team killed. Named as the main suspects, Eddie and Lily quickly realise their only hope lies with a powerful and mysterious bureaucrat (Morgan Freeman) who may or may not be on their side.