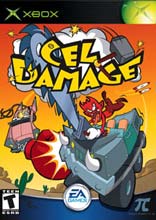 Due to COVID-19, we're unable to accept orders for non-essentials items at this time. Learn more...
Imagine a world where 'toons rule the road and the demolition derby is a way of life. In Cel Damage, the world's toughest 'toons face off against each other in souped-up, weapon-laden vehicles to out-maneuver, out-race, and out-smack each other for personal glory. These gas-powered gladiators battle it out in highly interactive cartoon environments where they can roam freely, discover hidden areas, interact with set gag pieces (such as the 100 ton weight), perform stunts, and whack the heck out of their opponents. And with a host of wild weapons, such as giant boxing gloves and baseball bats, at their disposal, these 'toons with attitude take part in vehicular combat as it has never been seen before.

6 playable characters, with 4 unlockable guest stars - one guest star for each theme.

A stylish cel-shaded look and state-of-the-art "stretch and squish" physics engine give the game the look and feel of an actual cartoon episode.