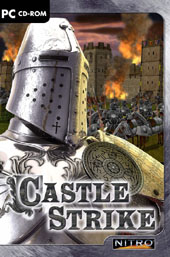 Unavailable
Sorry, this product is not currently available to order
Castle Strike is a Real Time Strategy Game. You enter into a virtual medieval world of knights and castles where an exciting saga of friendship, intrigues and betrayals, battles and sieges, unfolds against the background of the Hundred Years‘ War. Assume the role of a brave hero plotting out an exciting fantasy voyage through the medieval times filled with treachery, betrayal, battles and ambushes. Historical uniforms, armory, siege weaponry, landscapes with stylish medieval buildings, realistically animated and highly detailed units, as well as a fully flexible zoom-in camera, and a stunning selection of tactical and strategic options - these features are what make CASTLE STRIKE an outstanding absorbing experience to be enjoyed by up to four players (in multi player mode). You are confronted with evil-tempered neighbors and bloodthirsty robber knights that lurk around the dark forests of Central Europe. Furthermore, you must achieve various vital tasks. Amongst others these include: the upkeep of troops and servants, building castles and their fortifications, assaulting enemy strongholds, smoking out bandit camps, fighting glorious battles, and last but not least, rescuing lovely maidens from the brutal hands of dangerous barbarians. Features: