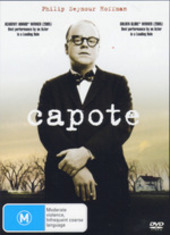 I got this movie as a filler, something to push the total order above the free courier price. It was on my list of movies to see, but nothing I considered was a ‘must see’. Was I surprised when I discovered an engaging fascinating story about an urbane man and his developing relationship with the down to earth inhabitants of small town America and two murderers around who the story revolves. This is a great movie, it will surprise you and you will be moved. I heartily recommend it.

In 1959, Truman Capote, a popular writer for The New Yorker, learns about the horrific and senseless murder of a family of four in Halcomb, Kansas. Inspired by the story material, Capote and his partner, Harper Lee, travel to the town to research for an article. However, as Capote digs deeper into the story, he is inspired to expand the project into what would be his greatest work, In Cold Blood. To that end, he arranges extensive interviews with the prisoners, especially with Perry Smith, a quiet and articulate man with a troubled history. As he works on his book, Capote feels some compassion for Perry which in part prompts him to help the prisoners to some degree. However, that feeling deeply conflicts with his need for closure for his book which only an execution can provide. That conflict and the mixed motives for both interviewer and subject make for a troubling experience that would produce an literary account that would redefine modern non-fiction.

Bolstered by an Oscar®-caliber performance by Philip Seymour Hoffman in the title role, Capote ranked highly among the best films of 2005. Written by actor/screenwriter Dan Futterman and based on selected chapters from the biography by Gerald Clarke, this mercilessly perceptive drama shows how Truman Capote brought about his own self-destruction in the course of writing In Cold Blood, the “nonfiction novel” that was immediately acclaimed as a literary milestone. After learning of brutal killings in rural Holcomb, Kansas, in November 1959, Capote gained the confidence of captured killers Perry Smith (Clifton Collins, Jr.) and Dick Hickock (Mark Pellegrino) in an effort to tell their story, but he ultimately sacrificed his soul in the process of writing his greatest book. Hoffman transcends mere mimicry to create an utterly authentic, psychologically tormented portrait of an insincere artist who was not above lying and manipulation to get what he needed. Bennett Miller's intimate direction focuses on the consequences of Capote's literary ambition, tempered by an equally fine performance by Catherine Keener as Harper Lee, Capote's friend and the author of To Kill a Mockingbird, who served as Capote's quiet voice of conscience. Spanning the seven-year period between the Kansas murders and the publication of In Cold Blood in 1966, Capote reveals the many faces of a writer who grew too close to his subjects, losing his moral compass as they were fitted with a hangman's noose. –Jeff Shannon