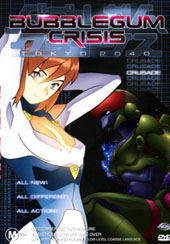 Unavailable
Sorry, this product is not currently available to order
All hell breaks loose as Linna's new hardsuit malfunctions during her first deadly mission, Genom unleashes a new wave of rogue boomers, and the A.D Police declare war on the Knight Sabers! Sylia's brother Mackey joins the team as the whole town goes up in flames in the second stunning volume of BUBBLEGUM CRISIS: TOKYO 2040! Linna Yamazaki, age 20, is the fourth and newest member of the Knight Sabers. Linna kicks off the 2040 storyline by arriving in Tokyo and almost immediately making connections between the Knight Sabers and the rock singer Priss. Although she is employed at a Genom subsidery company which manufactures Boomer parts, she has already grown dissatisfied with her lot in life. By the time we first meet her, she appears to be actively looking for a way to join the Knight Sabers. Linna's hard suit is a military green colour accented with red and orange trim, and is extremely maneuverable. As the newest suit of the group, it has some of the most advanced features, including a pair of long, ribbon-like cutters that can slice through almost anything. This newness is a double edged sword however, for it fails on its first mission with almost tragic consequences for its owner. Linna's suit also has armoured gauntlets, although she does not carry the heavy artillery"concussor pack" that Priss' suit has. "The look of the characters…mecha and battle scenes have been taken to a whole new level giving Bubblegum Crisis the quality and futuristic look its always deserved" -- N64 Gamer Contains Four Complete Episodes:
Release date NZ
January 1st, 2007
Movie Format
DVD Region
Edition
Brand
Director
Hiroki Hayashi
Language
English, Japanese
Length (Minutes)
90
Studio
Madman
Subtitles
English
Supported Audio
Genre
Original Release Year
1999
UPC
9322225005068
Product ID
1459959