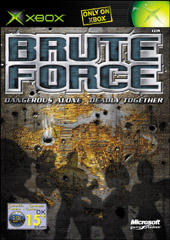 Due to COVID-19, we're unable to accept new orders at this time. Learn more...
Brute Force is a futuristic squad based, tactical shooter, played from a third person perspective. With just the tap of a button you can switch between four of the biggest bad-asses in the Universe. Command a team of elite mercenaries as they take on shadowy assignments across the known cosmos. Play simultaneously as the heavy assault trooper, Tex, the cyborg-enhanced sniper, Flint, the stealthy scout, Hawk, and the powerful feral alien, Brutus. Employ cunning, stealth and tactics to save your squad... or when all else fails just use Brute Force.