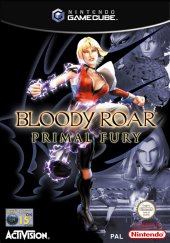 Due to COVID-19, we're unable to accept orders for non-essentials items at this time. Learn more...
“As one of 16 characters, each with their own human and hyper-beast forms, Bloody Roar: Primal Fury for the Nintendo GameCube lets gamers engage in fast and furious battles,” said Larry Goldberg, executive vice president, Activision Worldwide Studios.

“By combining exclusive features with the platform’s graphical and technological advancements, this version will be the most spectacular and challenging yet.”