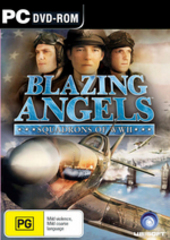 I recently bought this at the super low price it currently is, cos I wanted to try a different genre of game. Bought three other air-combat games at the same time, and this would be the best WWII at least, and second-best overall. It's an enjoyable enough air-combat game, would put it in the arcade side, than simulation, which exactly what I wanted. Played the first few missions, and it's solid, real, nothing flashy like Hawx or Ace Combat, and although it's about 8 years old now, still runs fine on modern hardware. It's has good controls, and the sound and graphics are fair, so if you want a WWII plane game, this is it. Would love to see something similar with an modern graphics engine though :-)

Experience the most gripping and famous battles of WWII through the eyes of a squadron commander and ace fighter pilot. From the battle for England, the attack on Pearl Harbor, to the bombing of Berlin, your pilot skills will create WWII history. Conquer the skies of Western Europe, North Africa, and the Pacific and bring your squadron back alive.