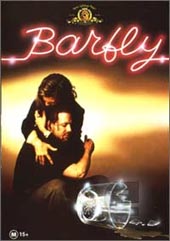 Based on a semi autobiographical short story by poet and screenwriter Charles Bukowski and directed by Barbet Schroeder, Barfly offers insight into the world of the alcoholic, where all that matters is the next drink. Henry Chinaski (Mickey Rourke) is a talented writer of prolific prose; unfortunately, he's also a skid row alcoholic with a violent temper. He picks fights nightly with Eddie (Frank Stallone), the bartender at the local watering hole the Golden Horn and lives in a seedy tenement, stealing food and trying to scrape together enough money for booze. Fellow alcoholic Willa Wilcox (Faye Dunaway) catches Henry's eye at the bar one afternoon, and although she has a reputation for being unstable, the two embark on a relationship with each other and the bottle.

Their liaison is full of drama, humour and irrational behaviour and is put to the test when Henry meets Tully (Alice Krige) a rich, privileged literary editor who wants to publish his stories and save him from himself. The film features exceptional performances from Rourke and Dunaway as they portray the highs and lows that are part and parcel of alcoholism – as well as love.