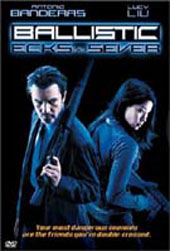 Your most dangerous enemies are the friends you've double-crossed.

It's the ultimate in infiltration. The maximum in lethalness. Super-operatives Ecks and Sever both want to get their hands on a newly developed, micro-robotic assassination device. But each spy finds something blocking the way. Something named Ecks. Or something named Sever.

Comments: I will combine shipping costs so please purchase some other items. I will refund any extra shipping charges that have been paid. Thanks. PS:- Region 2 (UK).