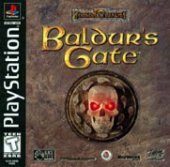 Due to COVID-19, we're unable to accept orders for non-essentials items at this time. Learn more...
The game takes place in TSR's best-selling Forgotten Realms. The western shore along the Sea of Swords contains a multitude of ecologies and terrains including mountains, forests, swamps, marshes, plains, cities and ruins. Collectively called the Sword Coasts, it attracts adventures and evil alike, and is the backdrop for this epic adventure.

The region encompassed by this game is roughly bordered to the South by the Cloud Peaks, the East by the Wood of Sharp Teeth, the West by the Sea of Swords, and the North by Baldur's Gate (the largest and most affluent city in the region).

Chaos threatens to overwhelm the Sword Coast. The state of Amn is under siege to the South, the High Moor is being overrun in the North, and the region around Baldur's Gate is in turmoil. In an area known for its ample resources, a crippling shortage is slowly developing for the metal that is used throughout the Realms.

What's worse, trading caravans coming from all directions into Baldur's Gate are under constant attack from bandits and cutthroats who loot not for gold and gems (although they often take those too) but for iron. The armed factions in Baldur's Gate can scarcely keep themselves armed and commoners are suffering all the more.

Some blame Amn for the chaos, other the trading cartels, and still others suspect the Dukes of Baldur's Gate. Yet, this contagion may be an early omen of some greater evil.

* Gripping non-limear adventure that spans 7 chapters, with dozens of subplots that branch out of the main scenario. Your decisions affect subsequent chapters and the entire gameworld as a whole.

* Transparent interface can be modified to play in turn based mode and makes it possible to play without knowing AD&D rules.