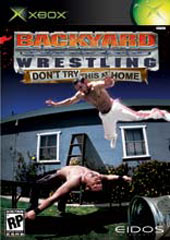 Due to COVID-19, we're unable to accept orders for non-essentials items at this time. Learn more...
Backyard Wrestling places you in the role of an aspiring wrestler. You must be prepared to endure extreme amounts of pain and take incredible risks in order to move one step closer to the BYW title and ultimately be crowned 'The King of Hardcore'. But the road to glory is long and dangerous. Dozens of weapons including thumbtacks, barbed wire, light bulbs, baseball bats, tables, trash cans, and stop signs are at your disposal to help re-arrange the faces of new challengers. And did we mention the fire?