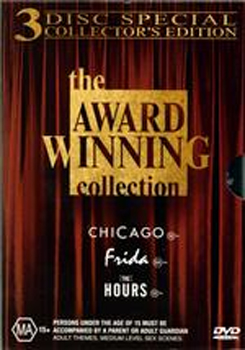 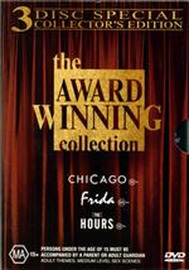 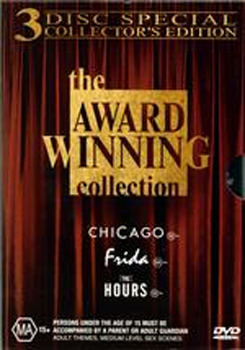 Show Hide Adult Content
Unavailable
Sorry, this product is not currently available to order
Chicago:  Fame hungry Roxie Hart dreams of a life on the Vaudville stage, and spends her nights jazzing it up in the bright lights of Chicago, continually hoping that she'll find her lucky break, and be shot into 1920's stardom, so able to flee her boring husband Amos.

In awe of seductive club singer Velma Kelly (who is subsequantly arrested for the murder of her husband and sister - after discovering their affair), Roxie meets Fred Cassely a man who convinces her he can 'make her showbiz career take off'. However after Roxie has undergone the 'casting couch' treatment, and Fred has had his wicked way with her, he reveals that he has no more connections in showbusiness than she does. This is the final straw for Roxie, and her constant anger at rejection explodes. She shoots Fred Cassely and kills him. Upon discovering her infidelity, Roxie's husband Amos refuses to take the blame for the murder and Roxie is sent to jail, pending hanging.

In jail she finally meets tabloid darling Velma Kelly, currently receiving huge media attention for the double murder she committed earlier in the tale. Sharing the clink with Velma, are a collection of other sly females, all awaiting trial for the murders of their own partners. Velma is aloof to Roxie, however the prison Warden Mrs Morton offers Roxie the opportunity of representation by slick Chicago lawyer Billy Flynn. Billy is more a showbiz P. R agent than a legal lawyer and minipulates the tabloids into thinking Roxie is no more than an innocent 'good time girl' who took the wrong path, than a scheming murderess. The tabloids go crazy for the new girl on the cell block, and Roxie finally becomes a star. However due to Roxie's new found fame, Velma is forgotten about. She is forced to approach Roxie with an offer of a part in her Vaudville act (filling the gap left by her murdered sister), but Roxie turns down her offer flat, thinking she needs no support in topping the bill.

However, just as Velma's star fell, so does Roxie's, when Go-to-hell Kitty arrives at the jail on a multiple murder charge, the press forget Roxie and now she and Velma are in the same boat.
With one more trick up her sleave Roxie manages to bring the media attention back onto her, and her day in court arrives. Billy is now ready to play the ultimate showman!

The Hours In 1923, Virginia Woolf (Kidman) is starting to write her novel, 'Mrs. Dalloway,' under the care of doctors and family. In 1951, Laura Brown (Moore) is planning for her husband's birthday, but is preoccupied with reading Woolf's novel. In 2001, Clarrisa Vaughn (Streep) is planning an award party for her friend, an author dying of AIDS. Taking place over one day, all three stories are interconnected with the novel mentioned before, as one is writing it, one is reading it, and one is living it.