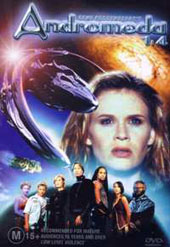 Due to COVID-19, we're unable to accept orders for non-essentials items at this time. Learn more...
Set in deep space, Gene Roddenberry’s ANDROMEDA chronicles the efforts of Captain Dylan Hunt (Kevin Sorbo) and his crew as they try to restore a government that once presided over an extended period of peace and prosperity. Betrayed from within, the civilization spanning three galaxies was plunged into chaos. After plunging into a black hole, Dylan and the remaining crew of the “Andromeda Ascendant” are rescued by the salvage ship Eureka Maru to discover that 300 years have passed, and their entire world is in ruins. It is now up to an eclectic band of heroes to reunite the diverse cultures of the known worlds.

"The Ties That Blind"
The Andromeda crew receives a distress call from Khalsa, the great Wayist whose ship was attacked by Restorian eco-terrorists. As Andromeda retrieves them to safety, Beka is shocked to find that Khalsa's assistant is her brother Rafe, a renowned con-artist turned religious convert.
Beka warns that Khalsa is a fake but when Tyr tries to shoot him, he metamorphoses into a swarm of nanobots, fiercely attacking Andromeda and rendering her dead in space.

"The Banks of the Lethe
Harper experiments with teleportation - transporting objects from place to place - and explains to Dylan that this may also work with humans and even the Andromeda ship.
Dylan decides to risk his life and requests Harper to teleport him back 300 years to find his wife Sara. Dylan is sent first as a hologram, and on meeting Sara, decides to actually test the experiment and try to retrieve her.
The Andromeda is left exposed to enemies and when fired on, Dylan is faced with highly emotional life and death decisions.
Release date NZ
January 1st, 2003
Movie Format
DVD Region
Edition
Aspect Ratio
Director
Allan Kroeker
Language
English
Stars
Studio
Magna Pacific
Supported Audio
Genre
Original Release Year
2000
UPC
9318500007346
Product ID
1462574